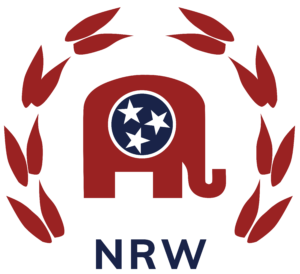 WELCOME
The Nashville Republican Women have been continuously active since 1949. We have logged thousands and thousands of hours participating in campaigns, supported Republican candidates and helped build the Republican party. From stuffing envelopes, making phone calls, knocking on doors, establishing and maintaining headquarters, and greeting voters at the polls, to serving in leadership positions at the national, state and local levels, we have supported our candidates. Several of our members have run for various offices.
It’s not all about politics.  For the past 13 years, we have provided toys (and sometimes warm coats) to the Children of Tennessee Soldiers and the Fisher House at Fort Campbell has twice been the recipient of generous donations from NRW,  (The Fisher House provides military families with housing close to a loved one during hospitalization for an illness, disease or injury).
We hope you will join us! 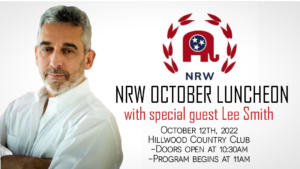 Even before he published the epochal “The Plot Against the President: The True Story of How Congressman Devin Nunes Uncovered the Biggest Political Scandal In U.S. History” in 2019, subsequently made into a movie by Amanda Milius, Lee Smith was arguably the most important investigative journalist/thinker in our country on the right, the one we could most depend upon to counter the endless lies of the mainstream media.

Lee has written articles for just about everybody from the now-defunct Weekly Standard to Tablet and now the fastest-growing newspaper in America, The Epoch Times, where Lee has his own interview show on Epoch TV, “Over the Target.”

Among his other important books are the sequel “The Permanent Coup: How Enemies Foreign and Domestic Targeted the American President” and “The Strong Horse: Power, Politics, and the Clash of Arab Civilizations.”

No one is better qualified to give an overview of our country before the crucial November election and help guide us on how to avoid being reset by the “Great Reset.”

Join us for our GET OUT THE VOTE efforts in support of REPUBLICAN CANDIDATES in NASHVILLE and to WIN BACK THE U.S. HOUSE and BRING HISTORIC WINS in NOVEMBER!

If you are interested in finding out about volunteer opportunities with these candidates, sign up on NRW’s SignUpGenius.